Primary creep represents a phase where the transient creep rate actually decreases as the creep resistance of the material increases by virtue of the deformation undergone by the material.

In the case of lead, which is subject to creep at room temperature under the load of it own weight, primary creep is the most important process.

That is the temperature dependent restoration of physical properties without observable modifications of microstructure.

The measured average of secondary creep rate is called the minimum creep rate.

It is the most important design parameter for selecting suitable materials to be used in definite applications.

Practically two standards are used. The stress to produce a creep rate of 0.0001%/hr (or 1% in 10,000 hours) is considered for creep resistant alloys used in gas turbines.

For pressure vessels, boilers and steam turbine materials, the requirement is for the stress that produces a minimum creep rate of 0.00001%/hr (or 1% in 100,000 hours, equal to about 11 years and a half).

Related to Creep-test is a simplified procedure, called Stress Rupture Testing that, without measuring the actual creep rate, tests the creep behavior of materials at higher loads and much shorter times.

Here the material and its heat treatment condition are specified, as well as the specimen shape and dimensions.

The test is performed in accordance with accepted Specifications for the material in cause, that establish the temperature and the initial stress.

The results to seek by testing are the time and the elongation at rupture.

These results must meet the minimum requirements spelled out in the applicable material Specification, for the particular batch of material to be acceptable.

An Article on Modern High Temperature Testing was published (11) in Issue 155 of Practical Welding Letter for July 2016.
Click on PWL#155.

To get at no cost every issue of Practical Welding Letter deliveret at your inbox, please subscribe. 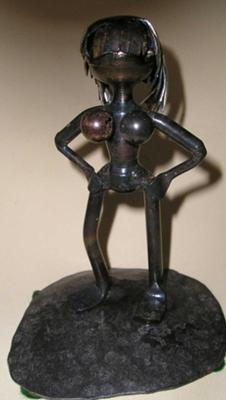 Any questions or comments or feedback? Write them down and send them to us by e-mail. Click on the Contact Us button in the NavBar at top left of every page.

Let us remind you that, if you are interested, we offer a no cost subscription to our Practical Welding Letter and a bonus book in pdf format to be made available for download to your computer on the subject of
PRACTICAL HARDNESS TESTING MADE SIMPLE.
Click on Subscription.

To reach a Guide to the collection of the most important Articles from Past Issues of Practical Welding Letter, click on Welding Topics.


If you did not yet find what you need, why not typing your question in the following Search Box?

Click on the following image to watch the SBI! TV Show!

No better way to get to know SiteSell,
the Company that helps everybody build a Business on the Internet,
than following them at
http://twitter.sitesell.com/Quark.html

Specific questions about SiteSell?
Ask the Experts. Go to:
http://question.sitesell.com/Quark.html


Welding Problem? Solve it! with Help from a Welding Professional.
Upon freezing this site for reading only Correspondence and Consultations are no more available.